When I was a Young Person™, I went through a massive hippie phase, but in the whitest, most uptight way possible.  No illicit drugs or free love for this honey badger; my hippiedom was confined to doodling peace signs and rikki-tikki flowers on my notebooks, wailing along with Big Brother and the Holding Company, and bemoaning the fact that I never got to Woodstock despite having parents who were barely old enough to attend (an older, more self-aware Witty Child knows this was probably for the best, since I like hygiene and dislike crowds, but still…all those musical acts…).  Oh, and tie-dyeing like it was going out of style (it was).  I eventually stopped doing it when I ran out of places to wear it and people to give it to, but still always liked the look of it.

When I found out from my friend a few months ago that he had tried it as a child, with limited success due to some faulty technique on his mother’s part, I decided it was time to break out the rubber bands again.  We turned his apartment into a sweatshop – literally: it was boiling hot out-of-doors, and because we were situated on the linoleum floor of the hallway in order to minimize damage from drips and to allow access to both the kitchen and bathroom faucets, neither of us benefited from any breeze the open windows might have provided – and got our hippie on.

We had to soak the shirts in soda ash in batches due to space constraints, but found that each 20-minute soak was approximately just enough time to get the current shirt finished and wrapped in plastic, and rinse off our gloved hands before starting all over again.

Not exactly awe-inspiring, are they?  In order to shower, he had to gingerly remove them and try not to drip dye out of the ends while they did their overnight soak.

But when he unfurled them and rinsed them out the next morning, well: 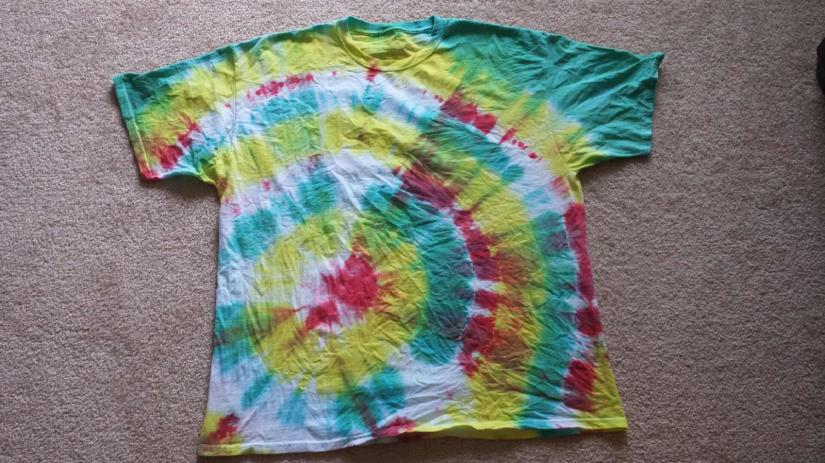 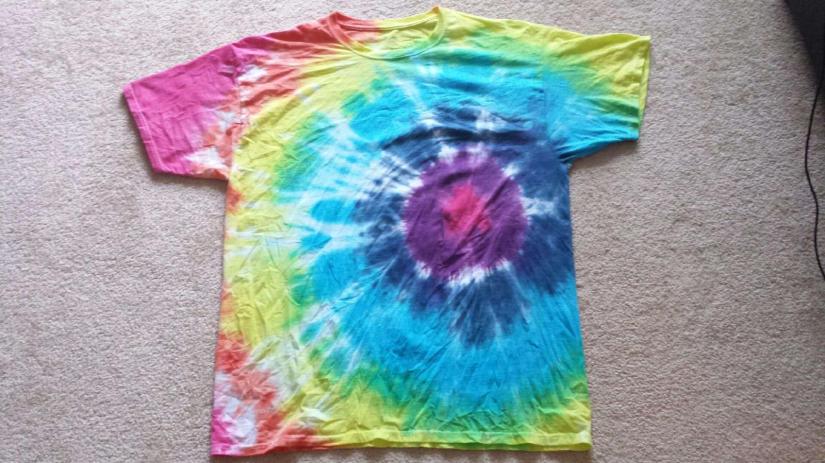 Has anyone ever tried this with children?  I’m appalled that they market some of these kits as a fun birthday party or day camp activity, considering the mess that two grown adults with fully developed motor skills made.  I can’t imagine that being relaxing!

This has slaked my craving for a while, but I’d like to get my hands on a softer, cotton-poly blend shirt rather than the $4 Fruit of the Loom special from the men’s department at Wal-Mart – now that we’ve got our technique down, spending a little extra on raw textiles wouldn’t break my heart.

Thanks for looking…and peace out! 🙂