It’s been well-documented in my years of blogging (and even more years baking and not putting it out there on the interweb) that chocolate and peanut butter is a flavour combination that rates very highly with my test audience.  Frankly, I think that the very best cookies contain lots of peanut butter and little to no chocolate, but hey, give the people what they want, right?

I grabbed my Baking Buddy and told him we were going to try the Buckeye Brownies as published on the Brown Eyed Baker.  Even though I don’t typically like having someone else around when I’m baking (seriously, this towel has my name all over it), it was actually a really ingenious if kind of Marxist solution: by splitting the cost of ingredients, each person is only out half the cash, and each person gets half a pan to eat rather then try to work through an entire 9 x 13 pan alone.  Plus, it’s a fairly inexpensive way to spend an afternoon, and feels productive.  That’s what, win-win-win-win?  I can’t argue with that kind of logic.

Although I’ve got a totally kickin’, never-fail brownie recipe of my own, I took a leap of faith and followed the recipe to the letter.  My devil-may-care attitude was rewarded; those brownies – a.k.a. the ultra-important foundation of this entire endeavour – turned out perfectly.

A lovely, slightly cracked top – what a sight to behold!  Baking Buddy’s mind was blown when I demanded the aluminum foil to line the pan: he had never done that before, and marveled at the ridiculously easy clean-up that followed (eventually).  Waiting the recommended time for these to cool enough to add the next layer was the longest part of the entire process, so if you’re going to try these, make sure you can find some way to amuse yourself for a while.

Action shot!  (And clearly, we don’t believe in putting our groceries away during brownie-cooling downtime; sorry.)

This part was a lot like the peanut butter frosting I use on cupcakes, only…more.  Lots more.

Only here did I deviate from the recipe.  The recipe called for milk chocolate chips in the ganache/glaze, a thought which immediately made my teeth hurt.  Don’t get me wrong, I love milk chocolate, particularly if it’s got peanuts, caramel, or nougat in it.  But the thought of it smeared on top of a thick sweet layer of peanut butter?  Shudder.  I used semi-sweet instead, a twist heartily supported by Baking Buddy. 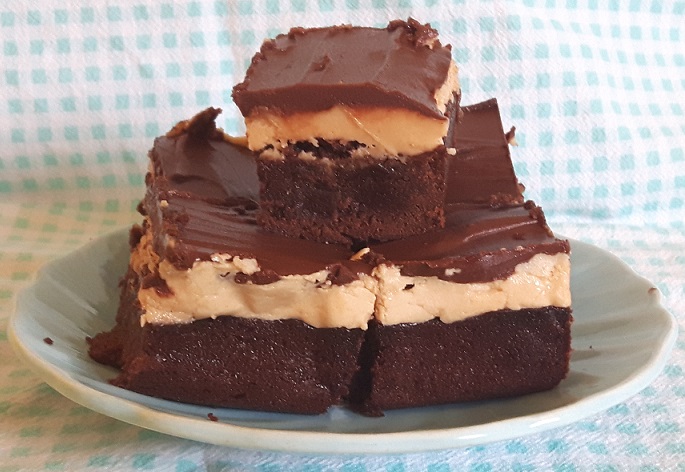 As we cut them, my first, stomach-dropping thought was, “They look like Nanaimo bars!”  (Something I would likely never make because they’re far too sweet and rich.)  “Hey, they kinda look like Nanaimo bars,” remarked Baking Buddy cheerfully.  It’s all about agreeing on the important things, folks.

These brownies are lovely, and the layers showed perfectly, and…holy crow, are they ever rich!  I can’t begin to imagine what milk chocolate chips would have brought to the party.  If you’re going to make ’em and eat ’em like this, a cup of coffee or glass of milk (depending on your preference) is strongly recommended…but during the postmortem, we discussed ways to make them better.  Halving the peanut butter mixture?  Halving the peanut butter mixture and omitting the chocolate glaze?  The top two layers almost ruin a wonderfully chewy brownie that stands up well on its own – but on the bright side, I now have a second basic brownie recipe in my arsenal.