I actually made this last year for Canada Day, too, and it a) got inhaled so quickly that I never got any “completed” pictures, and b) was such a hit that my mom stole my recipe for a get-together at her sister’s house a few weeks later. So when I wanted something vaguely patriotic to make, this felt like the obvious choice: Strawberry Shortcake Icebox Cake.

Because I’m working from home and get to skip the commute, I used what would normally be my on-the-road time to clean and chop the strawberries as prescribed.

Once they were ready to go, the rest of it came together really quickly and beautifully after work.

Two things I did differently from the recipe: I used 3 full cups of heavy cream (horrors!) rather than the 2 3/4 cups called for in the recipe; also, it was too ding-danged hot to turn the oven on and do the topping, so I settled for a sprinkling of graham crumbs instead.

If, however, you are making this on a day when it’s not 38 degrees with the humidity, or you have a naturally higher tolerance for the oven in summer, I highly recommend making the topping. It’s crunchy and wonderful against the creaminess of the whipped cream-strawberry mixture.

The first piece was a mess to get out of the pan, but look at the beautiful layers it revealed! The ladyfingers do tend to get quite soft after a couple of days, so best to enjoy this within the first day or two after making it.

I know that red velvet cake is generally considered to be a southern dessert.  That’s “southern” as in “below the Mason-Dixon line”, and not “Windsor” – being within spitting distance of the Ambassador Bridge doesn’t count, but I really, really wanted some sort of red velvet cupcake for Canada Day.  It’s red cake!  With white icing!

Silly me: if I wanted a patriotic dessert, I should have stuck with something simple like Nanaimo bars or butter tarts (again).

See, I’ve got issues with red velvet cake.  The Crimson Velveteen cupcakes from Vegan Cupcakes Take Over the World are moist and delicious, but, well, darkish.  (The authors fully own this colour issue, arguing that their dessert is much classier than some of the day-glo red versions you see.  Very well, but what if I want bright red?)

Last year I tried the recipe on the Brown Eyed Baker.  Those puppies were nothing short of fire-engine in the picture on her site, but were just as dark as my original recipe and much less flavourful once baked.  Talk about your bait-and-switch!

When I happened upon the red velvet recipe on Sally’s Baking Addiction, I thought I had died and gone to baker’s heaven.  Sally is a full-on baking geek who understands the chemistry and technique involved in making a truly spectacular dessert.  I followed her recipe to the letter, and was rewarded with lovely, brighter-red cupcakes.  (The secret is using about half the cocoa called for in other recipes I’ve seen.)

They’re red and gorgeous and perfect!  They look exactly like the ones on the blog (piping techniques notwithstanding).  They rose, and formed these perfectly rounded tops upon which to pipe scads of icing

And they’re just as beautiful under the wrappers, too.

This is as striptease-y as it gets.

I so appreciated the methodology of the recipe: there’s butter for flavour; oil for moisture; buttermilk to make them tender; and two eggs, the whites of which were whipped and folded into the batter separately to keep things light and fluffy.

There was just one problem…they were kind of dry.  Okay, really dry.

My test audience was split about 50/50 as to whether or not this was a dry cake.  One conceded that “they were fine at first” and only got dry after a few days.  On the other hand, whenever I ate one, I felt like I was playing that old party game wherein one tries to whistle while eating crackers.  And I’ve made hundreds of moist cupcakes, so believe me, I know a dry cupcake when I taste one.  So disappointing!  The only thing I can figure is that the cornstarch in the batter dries them out – there’s cornstarch in the vanilla cupcakes from VCTOtW, and they’re nowhere near as moist as the other varieties.

It’s back to the drawing board for a red velvet recipe that’s at once moist and red; in the meantime, I think I’ll have to order a piece from Sals when the craving hits:

Update: After this fiasco, I tried the Betty Crocker red velvet cupcake mix-in-a-box, and once I got past the shame of using a mix, was forced to admit that they’re pretty darned good.  Darker in colour than my scratch-baked cupcakes, above, they’re moist and light.  And I still made my own icing from scratch, so that makes them practically homemade.

I think the name says it all – and I hope everyone is enjoying the day off!  (I know I am.)

I knew I wanted to bake something, but the question was: “What?”  I didn’t want to mess around with Nanaimo bars and all their layers, and butter tarts evoked a “been-there-done-that” response in me.

Ultimately, I decided on this:

I’ve always been drawn to those American flag cakes done with blueberries and strawberries, but knew if I tried that I’d wind up with a terribly unbalanced fruit load, with some slices being covered in berries and others with none at all (and my poor maple leaf would likely come out looking all Picasso-esque).  Some simple coloured sugar made an excellent substitution, because who cares if they get or don’t get a little sugar?  It’s strictly decorative, with no real effect on the flavour of the cake.

But make no mistake; this is no ordinary cake with a handful of sugar tossed artfully on top.

I hope everyone has a safe and happy long weekend – thanks for looking!

Timbits are ten for a toonie!

I didn’t quite realize how many uniquely Canadian desserts there were until just a few days ago.  You’ve got your matrimonial cake, your Nanaimo bars, your beaver tails – which might not be as cruel as their name suggests, but in any case, aren’t exactly part of a balanced diet.

And lo, the humble butter tart became my baking project for the long weekend.  (This would be way more fun that studying, I knew it!)  I used the “Better than Butter Tarts” recipe from Sarah Kramer and Tanya Barnard’s How it All Vegan!, and I’m pretty darned pleased with how they came out. 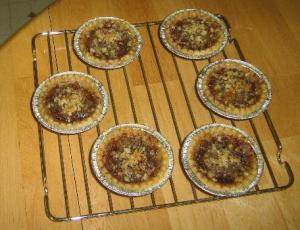 The recipe was soooo quick and simple.  The longest part was letting the raisins plump for 10 minutes before I could do much of anything else, but seriously?  So not a big deal when your payoff is tasty pastry.

My momma is a bona-fide butter tart aficionado, and had been more than willing to schlep me to the store to buy raisins and flaxseed.  She dubbed these “less cloyingly sweet than some of the others you get” (where?  Commercially?  From your recipe?), but “really, really good”.  I liked the addition of chopped walnuts on top.  They toasted up as the tarts baked, and added a hint of crunch to the whole deal.  I think this recipe is a keeper!

But before I resume hitting the books, a riddle: What does a Canadian gang look like? 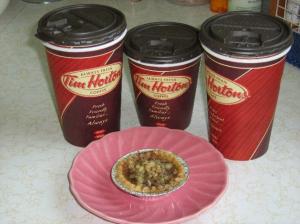