I know I’ve disappeared for the last month – January seems to have gotten away from me, but I was quite pleased with myself for having been able to post at least one handmade/home-baked item per month last year, and had no intention of letting my streak disappear!

My mom celebrated a birthday recently, and those of you who follow me regularly know my Birthday Rule.  Obviously there was going to be a homemade cake of some kind; it just took me a while to decide which kind.  I had contemplated tiramisu (vanilla cake, coffee, Kahlua, chocolate shavings) in all its adult glory, but finally decided I needed something chocolate-based.  No matter how fancy I get, she always seems to like my plain chocolate cake/cupcakes best of all.  I got the idea to make a chocolate buttercream frosting laced with raspberry syrup (the latte kind, not the pancake kind), with fresh raspberries for garnish. But the true stroke of genius, in my obviously completely unbiased opinion, was to place some raspberries on top of the bottom layer once it had been frosted.  It reminded me of some of the fruit tortes from store bakeries, and adds a really nice bit of flavour and texture where one might not expect it. I also had the perfect birthday card in mind: a Margaret Sherry illustration from The World of Cross Stitching a few months back.  It features a sweet little mouse presenting his hedgehog friend with a birthday cake. 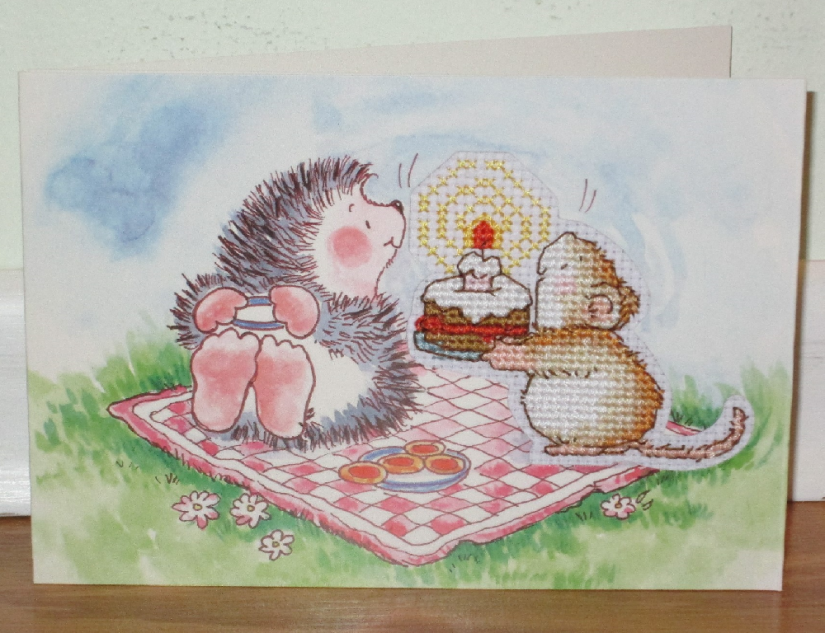 When I showed it to the other party guest, he commented, “Aw, look at the cute little muskrat!”  I’m not sure he was joking.

Also, update on my grammar hoop: I finally got to give it to its intended recipient this week, and he loves it.  He’s displayed it proudly at work, only to have one of his coworkers ask him: “Do you really do it silently?”  Maybe not always…

When I first saw the issue of The World of Cross Stitching with a free Margaret Sherry card kit attached – featuring a hedgehog, no less! – there was really no doubt as to whether I’d buy it.  I try to cross stitch a card for Mother’s Day every year, and the hedgehog factor was just the icing on the cake.  (Since hedgehogs aren’t indigenous to the region, their likeness can be difficult to find in stores.) 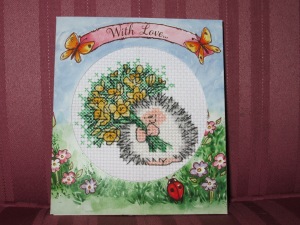 Despite a slow start, this came together much more quickly than I expected.  And the backstitch really makes his prickles stand out!  It made a cute addition to my mom’s gift.

Long time, no blog!  Work, class, two ridiculously convergent time-sensitive deadlines…aargh!  But: I completed my first non-cupcake project in ages and ages, and had to share.  For Mother’s Day, I made Mumsie a pair of hedgehog-printed boxer shorts. 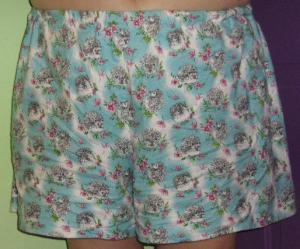 I hadn’t actually been near my sewing machine since the start of December, but this was a nice, easy project to get back into things.  I spied the fabric earlier this year at Fabricland and bought three metres on a whim with no real project in mind – this fit the bill perfectly!  I think this may be my new favourite pattern: cute and practical, with quick results.  Boxers for all!  (Say, wouldn’t that make Christmas gift-giving easy….)

I’m happy to report, she loved them and they have been in regular rotation since last weekend – hence, the creases in the photo.  And they go so perfectly with the awesome t-shirt I found for her on Mental Floss: 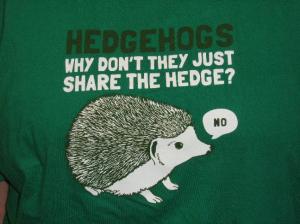 I’ll try to be more faithful about updates.  But with Father’s Day/anniversaries/birthdays around the corner, there’s got to be something craftacular to do, right?

Yes, Mother’s Day was two weeks ago.  I’ve been remiss.  I did, however, manage to get both little stitchy pieces finished in time for the big day, even if I wound up putting in the last ten French knots the morning of.  It was worth the stress, though, and the end result was… ïжак! 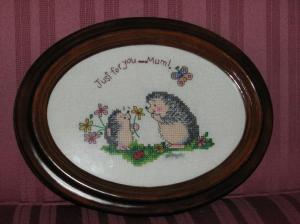 (I can’t remember how to ask where the train station is, for example, but ïжак , I remember.  Oy.)

I found this Margaret Sherry design in an issue of Cross Stitcher magazine and knew that I had to do it up.  I did it on 28-count evenweave rather than aida, mainly to make the crazy backstitch just a little easier – and did this ever pay off the night before Mother’s Day, as I was frantically working the lettering.

And lo and behold, Mill Hill released new spring kits in plenty of time for me to stitch one: 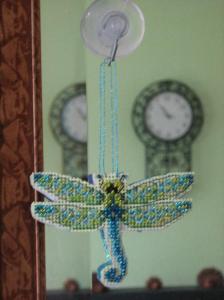 This one was from the kitties.  🙂  The kit came with a magnet, but no one would ever get to see it on the fridge, so I finished it as a hanging ornament instead and backed it with some holographic paper I found in my scrapbooking stash.

(As always, clicking on the photos will make them larger – thanks for looking!)

Update: I was finally able to give the birth sampler/card to my coworker last week, more than a month after the baby was born, but no matter…

My mumsie’s birthday was also last week; naturally, much home-made goodness was in the works.  I made her blue velvet cupcakes (blue is her favourite colour) with vanilla-coconut buttercream frosting.  It’s kind of hard to tell in the photo what colour they are, but trust me, they’re blue. 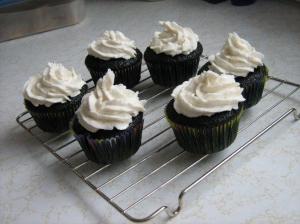 She still collects hedgehogs, so a hand-stitched card was a must: 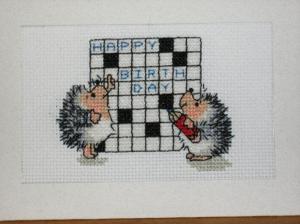 It’s from issue 216 (I think!) of Cross Stitcher, and originally said “Nice Cross Stitch”, but I took some artistic liberties with it.  I still have a baby-sized callous on my finger from doing the backstitch on that.  Uurgh.  Trying to pierce the fabric where there’s no hole and it plainly doesn’t want to be pierced becomes old after a while.  Still, I think the end justified the means.

For the next piece, you must understand that “Bork” is a verb in our household, and not just an interjection.  In the kitchen, dropping, spilling, or mixing vigorously and flinging, well, anything, will cause someone to yell, “You borked the ice cream/potatoes/toast!”  (Much as the Swedish Chef yells “Bork, bork, bork!” just before he sends his utensils flying.)  She “got it” as soon as she opened it, and I daresay as custom designs/projects go, this was one of the best.  Also simplest. 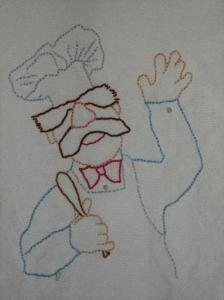 It’s on one of those awesome tea towels from Sublime Stitching which was an absolute dream to work on, and is currently brightening up the oven door.

As always, thanks for looking!

So…immediately after the Christmas rush and all the presents therein were finished, and I had had a chance to repress spending time with relatives and all that good stuff, I started a new project which, though some sort of time-machine trickery, I managed to finish for my mom’s birthday at the end of January.

You’ll recall from my last post that she’s got a thing for hedgehogs, so I found this sweet Country Companions kit sent to me by my friend Rachael.  It’s called “Birthday Surprise”, and at approximately 5″ x 7″ (this from the package details), is just a row or two too large for the 5″ x 7″ frame bought to accommodate it, but I can live with a little missing balloon.  Ain’t he adorable?  There are few things more becoming on hedgehogs than bashfulness. 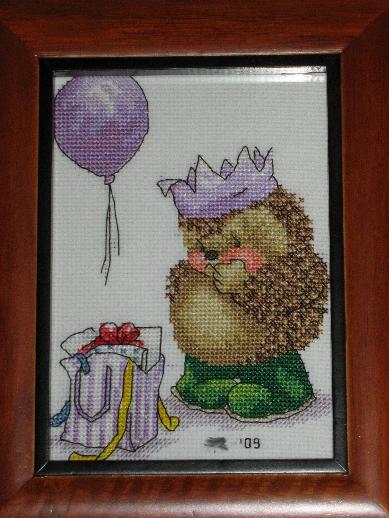