Although I’m not thrilled about the cold autumn mornings, I love that the cooler weather means I can break out the soup pot again.  Honestly, I could quite happily eat soup every day, all year round, but (sigh) not everyone shares my obsession with the stuff, so the cooler weather means that the rest of my audience will be equally enthusiastic about a steaming bowl of goodness.

Much to my chagrin, I had never heard of shchi before, but when I found a recipe for it on the Post Punk Kitchen, I knew I had found my next undertaking. 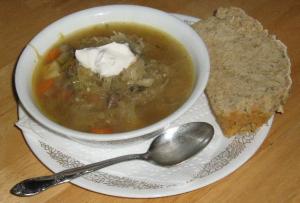 Mmm…soup!  I used parsnips instead of potato or a potato/parsnip combo, and between that and the black pepper found the end result to be quite, well, peppery despite its unassuming appearance.  The dollop of Sour Supreme on top helped immensely to temper it.

But man, er, domestic goddess cannot live by soup alone, right?  Enter Garlic-Dill Bread from Julie Hasson’s Vegan Diner.  As a non-yeasted  bread it comes together quickly, using baking powder and beer as leaveners.  Sending me to the store for beer is a little like sending a nun to an adult novelty shop (Not.  A.  Clue.), but I think I did all right for myself.  I used Fort Garry Dark Ale, but can’t say I noticed either an overwhelmingly positive or negative taste.  (So, yay me!)

The very best part of it all: I have an almost-full pot of shchi in the fridge, ready to be warmed up again for supper tonight.