Remember my theory that if you don’t make homemade birthday dessert of some sort for someone, you don’t really care about them?  Well, a while ago, knowing that a certain someone had a birthday coming up, I asked him what his absolute favourite dessert was.  You know the one I mean – you could be in a restaurant, totally stuffed from a huge dinner, but when this rolls by on the dessert cart, you have to have it.

Why ask him so far in advance?  I wanted to give myself time to locate/perfect/veganize a recipe if necessary.  If he had replied, “Chocolate soufflé” or, “There’s this really awesome cake that my mother used to make – I don’t think it has an English name; my copy of the recipe is in its original German”, I was going to be prepared, darn it!  You can only imagine my surprise when, after mulling it over for a few seconds, he offered, “You know, I’m kind of partial to vanilla.  Not a big fan of chocolate, but there’s something about vanilla.”

Don’t get me wrong; I totally understand the appeal that is the blank canvas of an unadulterated vanilla ice cream cone.  It’s simple, pure, and wonderful.  But vanilla for a birthday cake just seemed so…uninspired.  (And frankly, not much of a challenge, but this isn’t about me.)  Still, if it was vanilla he wanted, it was vanilla he was going to get.  I only wished there was some way I could jazz it up a little bit.  A week or so later, it hit me: homemade funfetti cake!  He’d still get all the vanilla flavour, but with a far more celebratory look!  (It probably goes without saying that this is the basic vanilla recipe from Vegan Cupcakes Take Over the World, my staple for all things delicious and cupcake-y.) 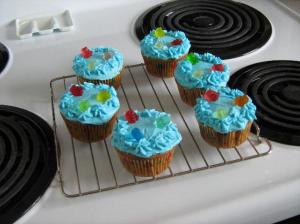 A little blue raspberry icing to seal the deal and make them look a little more manly (?). 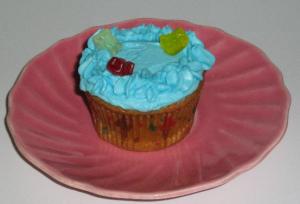 A closeup.  Besides looking manly, the blue frosting complemented the blue ice cream cones on the liners. 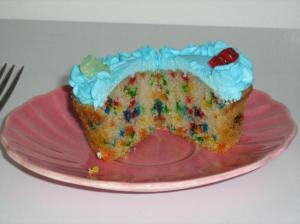 The inside!  The coloured-sugar sequins I bought to use as confetti melted during baking for all the colour without the crunch. 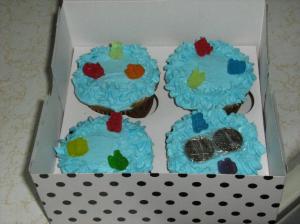 All packed up and ready to deliver to the birthday boy!

By now, you might be asking, “Yo, Witty Child, what’s up with your cake toppers?”

I chose Gummi Bears because the birthday boy likes them (this is about him, after all), but also because I saw this cake at Marble Slab Creamery and thought it was pretty: (But soooo not worth the cost, or the dairy/cholesterol factor.)

Oh, and the Saran-Wrapped coins?  This particular birthday was the double nickel, so two 2012 five-cent pieces seemed appropriate.

1 thought on “There’s a little fun in every bite”