Ever since SiriusXM introduced its Beatles channel last May, it’s been my mom’s channel of choice.  I like them as much as the next person, but not on a 24-7 (excuse me, 24-8, as the station itself says) loop.  In any case, it seemed like a great theme to go with for her birthday.  Remember when themed birthdays were only for kids?  Me, too, but there’s no denying that having a theme makes everything fall into place nicely.

I dusted off my rudimentary and extremely rusty card-making skills for the occasion.  As soon as I found the main image in the course of a random Google search, I knew it had to be used somehow: 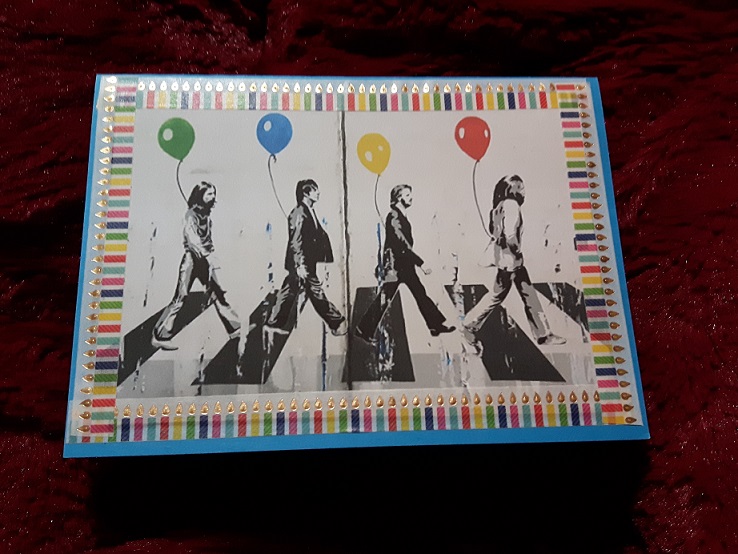 I’m almost chagrined to include a picture of it in all its amateurish glory, but it served as a nice introduction to…

Pressies!  Back in October I discovered some wicked Sgt. Pepper-print fabric on Spoonflower, so hello pajama pants!

(A word about Spoonflower: while I love the fact that I found this fabric, it was $20 USD/yd, and because it’s printed to order there were wide empty white strips all around my 3 yards, which feels like a bit of a rip-off.  Also, they use yards instead of the vastly superior-and-slightly-larger metre, which also feels like a bit of a rip-off.  Those extra 10 cm make a difference!) 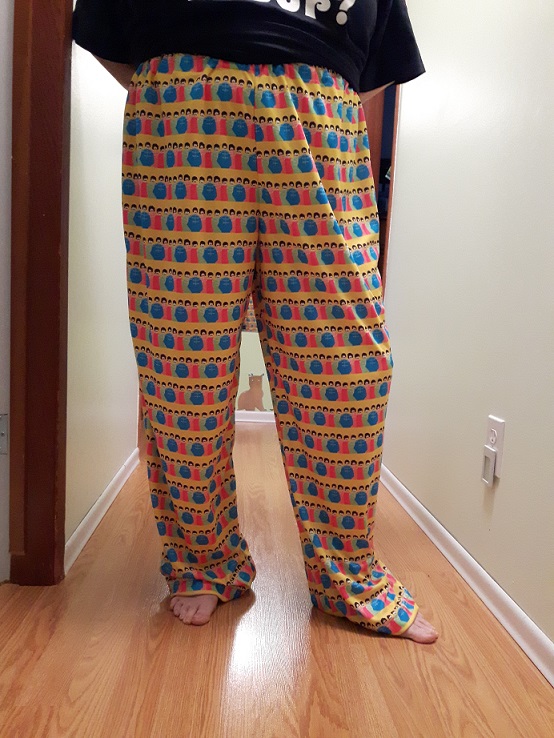 And look, their little Scouse heads just about line up perfectly.

I used McCalls 4244, which at this point I can assemble without the instructions.  The piqué knit I chose is slippery – and surprisingly heavy – and required a ton of pins plus a steady hand on the sewing machine.  But ah, the drape!  As I spent, oh, minutes and minutes (ha!) guiding it through the machine, I started musing how many Beatles song titles could be greatly improved by the substitution of “pants”.  “I Want to Hold Your Pants”, “Maxwell’s Silver Pants”…and don’t forget, “You know I need someone’s paaannnntssss…”

At this point, I’m sure someone across the pond is reading this, sniggering at my obvious misuse of the word.  “Everyone knows pants are what go under your trousers!”  Sit tight, because I’ve got you covered, too.

Behold, Beatles knickers.  (To go with the pants, of course.)

These are the midrise briefs from this pattern, and have very generous sizing.  I used fold-over elastic for the waistband, but went rogue and finished the legs but turning the edges under and running a zigzag stitch.  My reasoning was twofold: a) the FOE was a little fiddly to work with given the slippery fabric, and b) Fabricland only sells prepackaged cards of FOE at $6.49 for a yard – again with yards!  Since this particular view and size called for a total of 66.25 inches between the waistband and leg openings, that would have brought my total cost for elastic alone to $19.47 (unless I feel like sewing short ends together to make the proper length).  No, thank you.

I didn’t photograph the cake – I drew the themed-party line well before erecting some fondant-covered monstrosity in the shape of a yellow submarine, or whatever else it is one might do – but suffice it to say that a dark-chocolate cake with a cream cheese-whipped cream icing is lovely.

You say it’s your birthday?  We’re gonna have a good time!

Waaayyyy back in March, I finished sewing a pair of emerald-green pajamas for my mom in time for St. Patrick’s Day.  Even further back, in January, I had bought the necessary green cuddle satin along with enough purple to make another pair – and promptly dragged my heels until there were ruts in every room of the house

The pattern I used was McCall’s M4244, as always, and I don’t even want to look at the envelope right now.  I can more or less construct a pair of pajamas from that pattern without the instructions, at this point.

There’s no denying, however, that the purple set is delightfully regal-looking, and make the perfect nightwear as we transition from steamy summer nights into the crisp air of almost-autumn.

They aren’t nearly as bulky and lumpy as they appear in the photo: when I presented the finished product to her, she couldn’t be bothered with actually getting changed and instead pulled them on over her tank top and cargo shorts.  I choose to interpret that eagerness as a compliment.

A close-up of the buttons I used, along with a better idea of the fabric’s real colour.

I’d like to think my pajama-sewing days are behind me for a while, but I’d best not speak too soon.  One of my friends saw these and thought a pair of satiny pajama pants “would be all right”.  Maybe for Christmas…

A few years back, I made the grievous error of (gasp) sewing my mother a pair of pajamas.  Several years before that, she had received as a gift a pair made of this material that was satiny on the outside so as not to cling to the sheets when turning in bed, but cottony-soft on the inside, and she continued to obsess over them long after they had worn beyond use.  Naturally, when I found cuddle satin  – satiny yet snuggly! – at my local Fabricland, I had to replicate them for her.

This was a mistake, as it led to the construction of several more pairs of both the full-length and short-everything variety.  I’m almost surprised I can’t sew McCall’s M4244 from memory.  And so a few months ago, when she started in with, “I could almost use another pair of those satin pajamas…”, I did what I do best, which is to say, I pretended I was immersed in a book and didn’t hear her.  But then Fabricland had a 50% off sale at New Year’s, and my conscience got the better of me, and I took her shopping for fabric.  Six metres for the price of three (in two fabulous colours) was too good a deal to pass up.

But ah, there was a caveat.  She didn’t want a shorts set, but also didn’t want the sleeves, legs, or top to be as long as in the full version.  So, a capri?  “Well, maybe a bit longer than that…”  This was not the kind of thing that the “lengthen or shorten along this line” could handle – I was going to have to eliminate vast-ish swaths of fabric.  Aargh!  After holding the pattern pieces up to her, we more or less agreed on proper lengths for everything.  It was a tight fit on the fabric, too; had they been too short, her only option would have been to shrink.  In the end, though, we seem to have found the perfect balance. 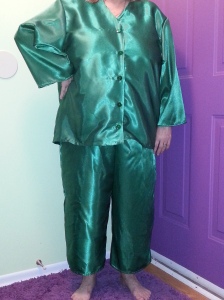 She won’t be tripping over the hems or setting her sleeves alight if by some odd chance she finds herself cooking over an open flame.  Sounds like an excuse for indoor s’mores to me!

Aren’t those buttons something else?  I think the opportunity to use green glittery buttons was my primary motivation to make yet another pair of these things.  And this is actually a far more accurate representation of the colour.

There are still three metres of royal purple satin patiently waiting their turn, but that’s a project for another day.