Did everybody have a great Mother’s Day?  It took me longer than usual this year to come up with a cohesive gift/meal plan, but luckily that all fell into place within the last week or so.

My original intention had been to make the Tiramisu Pancakes from Chloe’s Vegan Desserts, but then I saw the IHOP commercial touting their new Cupcake Pancakes and Red Velvet Crepes, and darn it, I was moved.  The nearest location to me that doesn’t require a passport still requires an overnight bag, so it was time to take matters into my own hands: 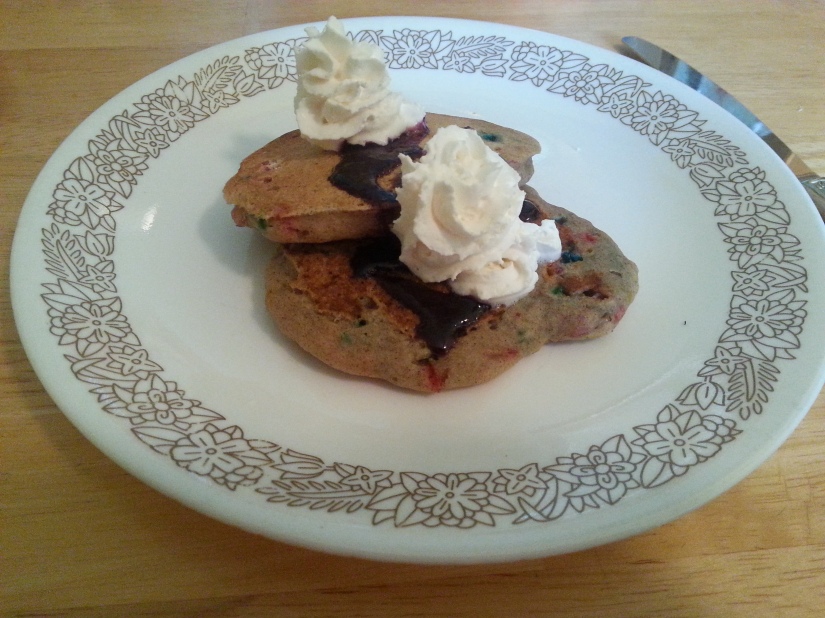 Behold: Confetti Pancakes, courtesy of the plain pancake recipe from Vegan With a Vengeance plus a handful of sprinkles thrown into the batter.  (Note that “plain” is a bit of a misnomer; the batter has cinnamon and maple syrup and vanilla in it for flavour before my own addition, and is wickedly delicious.)  And yes, that’s blueberry syrup drizzled on top.

My Birthday Cake Theory extends to Mother’s Day as well, so I whipped up a batch of chocolate cupcakes from VCTOTW last night and decorated them this morning.  Now, as I’ve gotten older and less cute, I’ve been replaced by a furry, four-legged little sibling, and he provided me with decoration-inspiration.

He’s really quite impressed by this homage.