My mom had her birthday at the end of January, but due to work scheduling, I wound up having to make her cake the weekend before.  I saw the basic idea in an old issue of Woman’s World, which is a magazine that I would generally never, ever buy – except that this issue had featured adorable Hello Kitty cupcakes on the front cover, and I had been unable to resist it.  They also had a layer-cake version of the cupcakes inside, but their recipe used something like four egg whites in the batter and another two in the icing, with no mention of what to do with the yolks, so I quickly dispensed with that idea and instead used my trusty vanilla cupcake recipe from Vegan Cupcakes Take Over the World as well as the fluffy buttercream icing from the same.  I also thought I might leave the kawaii characters off the cake, and maybe give it a more mature vibe.  Because nothing says “mature” like pink cake, right? 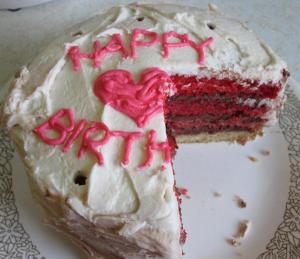 I, of course, did not think to get a picture of it while it was intact and free from candle holes. 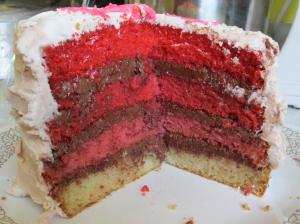 Holy ombre, Batman!  I used varying ratios of gel food colours to get the different shades, and they worked like a charm.

That’s a chocolate-cream cheese filling between layers.  Since the cake itself is just vanilla and not overly sweet, it provided a nice balance and helped keep it moist for the next few days until we could get it all eaten.

She had to wait a couple more days to get the rest of her birthday goodies.  I always try to make a handmade card of some sort: 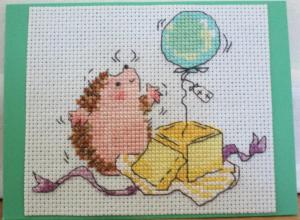 And when I first saw this design on Urban Threads, I knew it had to be made into a t-shirt:

I did him in orange to look like her big ol’ furbaby.  He’s painted on – not embroidered – and I think the blue really makes him pop!

Thanks for looking – have a wonderful weekend!