I’m still alive – and still baking – but really, there are only so many times one can photograph and blog about chocolate cupcakes (which get made more often than not, as they appear to be a perennial favourite).  I needed to break out of my routine!

When I first saw the recipe for Spumoni Cake in Kris Holechek’s Have Your Cake and Vegan, Too!, I was immediately drawn to it.  Spumoni is one of those things…just mmmm…I don’t crave it that often, but there is nothing quite like it, and substitutes (such as plain chocolate) will not be accepted.  I had dragged my heels in making it, though, because although I don’t mind making full-blown cakes for birthdays and other occasions, I find that cakes beget terrible portion control.  Say what?

See, anyone who’s baked a cake or even whipped up a Duncan Hines mix knows that a standard two 8-inch layer cake uses 24 cupcakes’ worth of batter.  Not a problem, except truthfully, when’s the last time you got 24 servings out of a cake like that?  Unless you’re feeding the masses or are hyper-heath conscious, no one cuts slices that thin.

The really obvious solution was to halve the recipe and turn it into cupcakes.  Tah-dah!

The original recipe makes a 9-by-13 sheet cake, and instructs the baker to randomly drop blobs of all three batters, then marble.  Because I was working small-scale, I contented myself with layering a spoonful of each in the cup, knowing full well that they’ll heave and bake up in random patterns.  See? 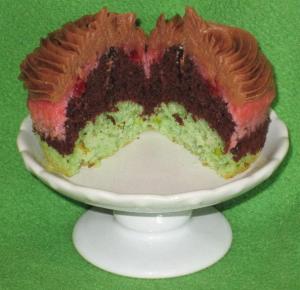 I did alter the recipe a bit: instead of puréeing cherries for the pink batter, I diced up a few maraschino cherries, and added a bit of raspberry-flavoured Torani syrup for flavour and colour.  I added the syrup to the frosting, too, for a chocolate-raspberry topper that helps bring out flavours in the cake.

When I fed these to my test group, I was told the flavours “kind of play together – it’s hard to pick out each individual flavour without tasting each part separately”.  Hmmm…just like the ice cream!

3 thoughts on “Cake and Ice Cream – Together at Last!”