Ahhh….I love Halloween.  I might have mentioned that before, but it bears repeating.  This is an entire day where you’re expected to wear a costume and eat candy.  If television would air Technicolor-filmed musicals all day instead of horror flicks, it just might be the perfect day.  And I don’t let being an adult (ha!) with a career (ha!  ha!) stop me – I’m shameless, and will show up to work in costume even if I’m the only one in the whole office who’s dressed up.

While browsing the Halloween department at Target recently, I was a little disappointed.  Sure, Tar-zhay had some different costumes than WalMart (for which I have yet to come up with an adorable, French-sounding pronunciation), but their candy selection was rather mundane.  Same old, same old – and nary an Eat-More in sight.  (These are a precious, precious commodity, and I would trade my strictly hypothetical firstborn for a bag of the minis.)

Ah, but they did have some different food preparation products – juice blends with ghoulish names, a set of four different sprinkles in test tubes, some cake mixes.  One that caught my eye made an orange-and-black marble cake with purplish icing.  Cute.  The price?  $7.99.  Eight bucks for something I could do myself?  No way was I paying that kind of money!  So I came up with this:

This is the basic marble recipe from…well, you know.  I used gel food colouring to get the batters just the right shades, and then proceeded to fill and swirl as usual. 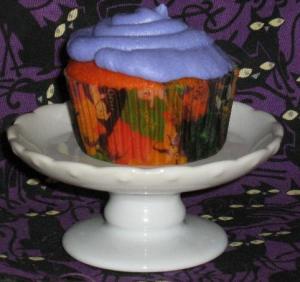 Now the only hurdle to clear is whether my test audience finds black cake appetizing or not.  Come on, it’s chocolate….