Okay, so I’m not insanely early with this, I swear.  Just kinda, sorta four months late.  I think my inner monologue started something like this (perhaps abridged for the sake of time and space): “Oh, boy, I love doing Mill Hill beaded kits.  They’re so quick and cute, and if I start stitching now I’ll have this finished in plenty of time for Christmas…All right, now that I’ve got the stitching finished, all that’s left is to add the beads.  Ooh, they’ll twinkle nicely when this is hanging on the Christmas tree….Oh, well [bad word]!  There’s a bead stuck on my needle!  Hmm, maybe if I try pushing it back off the way it came…nope…”

One of the red beads got stuck (as in, super-stuck) on my beading needle.  Right over the eye.  I could neither slide it over the eye and down to its rightful place on the ornament nor slide it back off.  Considering that at this point I had already completed most of the beading and had, oh, three red beads to go, I was considerably unimpressed by this development.  So I calmly and rationally did what any psychologically normal person would do: stuffed the entire works into a drawer to be ignored until some to-be-determined point in the future when I felt like dealing with it.

A few weeks ago, I happened to bitterly mumble something about “that [bad word] bead”, to which my mom replied, “Why don’t you just take a pair of pliers and crush it?  You do have extras, right?”  Genius!  So, yesterday I took a pair of pliers and crushed the sodding little thing to bits, whereupon I cheerfully resumed my otherwise pleasant little project.  Here it is, with one of my mom’s potted plant-like things standing in for a Christmas tree.  Hey, foliage is foliage: 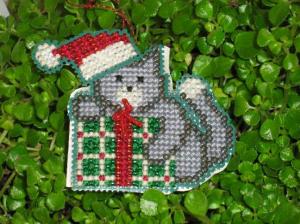 It’s called “Kitty’s Gift”, and I can see now that I need to trim the backing paper on it…but I’ve still got eight months or so.  She looks rather like my youngest cat, too.

(Yes, the cat, I got dressed up in time for Christmas.  The tree, not so much.)

Also on my list of Easter weekend homemakery, I made a pie from scratch for the first time.  Well, the crust is from scratch, at least.  I didn’t want to go to all the trouble of doing a scratch filling only to find out that the crust was going to be inedible, but…next time!  I used the Buttery Double Crust recipe from Vegan Pie in the Sky by Isa Chandra Moskowitz and Terry Hope Romero, and dumped a can of peach-passionfruit filling in between.  The edge of the crust turned out a little lumpy and imperfect, but I’m still satisfied for a first attempt:

My Pennsylvania RR Peach Passionfruit Pie.  One of the pies in the book shows a crust with little stars cut out; I happened to have a small locomotive cookie cutter handy so used that instead.

I could use more four-day weekends.  I get so much more done around the house than I do at work.  🙂